Giving back to our community is close to the hearts of the Channel Mechanics Team. And so, with everyday life slowly returning to normal, we wanted to recognise two Galway based charities that continuously provided tireless support throughout the pandemic, and beyond. With that thought in the back of our minds, the team set an ambitious target to both climb Croagh Patrick and raise €20,000 in the process in aid of the Galway Hospice Foundation and Galway Autism Partnership. 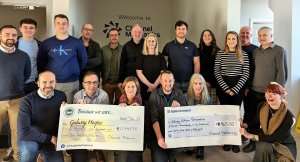 After two years of lockdown, we wanted to ensure that everyone had the chance to get involved in this year’s challenge. 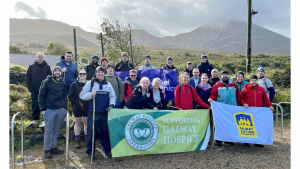 “When it came to choosing the charities, we turned to our staff. We asked employees to nominate charities they hold close to their hearts. We then chose the two charities with the most suggestions, finally confirming the Galway Hospice and Galway Autism Partnership”.

The Lead Up to the Charity Challenge

During the lead up to the challenge, it was important for the team to start training. Croagh Patrick, or ‘The Reek’ as it’s better known, is 2,507 feet in height, the 5th highest mountain in Mayo. The climb is 7km in total and not considered your everyday stroll. Therefore, the team started training!

As we know, Ireland isn’t known for its good weather…and this was no different the week of the Challenge. With a yellow wind and rain warning in place, the team didn’t panic. After a few team meetings and a quick re-evaluation, the team decided to proceed with the climb, but pushed the start time out in the hopes of avoiding the worst of the weather!

The Day of the Charity Challenge

The weather forecast did not lie! As the rain fell in the West of Ireland, the Channel Mechanics team made their way to Co Mayo. And despite the poor weather forecast, the team was lucky enough to get a window without rain. The wind, however, still blew strong. The team persevered and with plenty of words of encouragement and water breaks, each member of the team made it to the peak. The peak – the part we all longed for! Submerged by clouds for most of the day, it was difficult to know just how far away the peak was. The only indicator of how close you truly were was the distant laughter and cheering of those who had already made it to the top before you.

There was relief and a huge sense of pride at the peak of Croagh Patrick on the 30th of September. The climb was in no way easy, and for each member to make it to the top was a huge achievement.  Not only did we raise over €20,000 for two charities, but we also set ourselves a challenge…one that a lot of us thought we might not complete! To celebrate our achievement, the team stayed in Westport, gathering for a group dinner and some drinks. A day and night to remember! 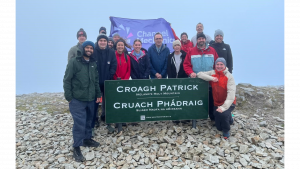 Each year Channel Mechanics employees generously donate a day of their holidays to charity. Thereby giving up a day’s holiday and donating their salary to charity for that day. To go one step further, Channel Mechanics pledges to match that salary donation, on behalf of each employee. This year the team raised over €17,000 through the donate a day scheme. But it didn’t stop there. We reached our target thanks to the kind donations from family, friends, business partners and customers. And for this, the Channel Mechanics team are beyond grateful! Having surpassed our €20,000 target on the day, the team continued to raise a grand total of…. €23,889.81 for the Galway Hospice and the Galway Autism Partnership.

A Word from the Charities

Galway Hospice has been caring for patients and their families for over 30 years. The Hospice supports over 1,000 patients in Galway city and county each year. All our services are provided free of charge, for as long as they are needed. These essential services include Inpatient Care at the Hospice in Renmore, Community Palliative Care at home and in the community, Medical Social Work and Bereavement Support, Occupational Therapy, Physiotherapy, Pastoral Care, and complementary therapies such as Art Therapy and Aromatherapy.

With the support of companies like Channel Mechanics and their employees, the hospice can continue to provide care to those that need it for many years to come. We are so very grateful to everyone who braved the elements to climb Croagh Patrick on a stormy September day and raised an incredible €11,945.50 for Galway Hospice!

On behalf of the board, our wonderful Galway Autism Partnership families and everyone at GAP, I would like to thank Tom and the gang at Channel Mechanics for choosing us as one of their charities to raise funds for. These funds make such a difference to a small charity like ourselves and are hugely appreciated. Well done to this group of colleagues for climbing Croagh Patrick, which is not an easy trek!! Thanks for your kindness, effort and generosity towards GAP. 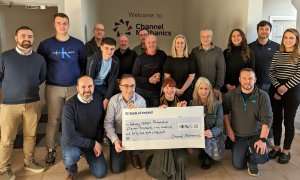 How Partner Levelling Can Support Your Partner Engagement Strategy